Tijuana, Baja California, October 26, 2020. - Viva Aerobus, Mexico's ultra-low-cost airline, and Cross Border Xpress (CBX), the exclusive pedestrian bridge for passengers of the Tijuana International Airport seeking to cross the border between the United States and Mexico, signed a commercial alliance in order to facilitate and enrich the travel experience offered by the airline.

Effective October 26th, passengers who transit from the United States to Mexico will be able to find Viva Aerobus counters within the CBX terminal to receive services from the airline in an agile and comfortable manner prior to their departure. Passengers will be able to document their luggage, print their boarding passes, select seat assignment, as well as purchasing plane tickets or adding additional services to their travel such as extra luggage, insurance, ground transportation in Viva Bus, among others.

“This new alliance provides our passengers with greater comfort, speed and practicality in their journey by taking advantage of the benefits offered by the Cross Border Xpress. Now, at the facilities of this binational bridge, you will be able to find all the Viva Aerobus services to fly from the Tijuana International Airport, one of our 5 operational bases, from where we have already transported more than 5 million passengers and where we currently operate 10 routes,” stated Juan Carlos Zuazua, CEO of Viva Aerobus.

As a result of this agreement, passengers will soon also be able to purchase their CBX ticket when booking their Viva Aerobus flight as part of their flight customization process.

“We are proud to enter into this agreement with Viva Aerobus and thus provide added value to the service offered for our mutual passengers while they cross the border in a fast, easy and now, even safer way," stated Jorge Goytortua, Cross Border Xpress CEO. 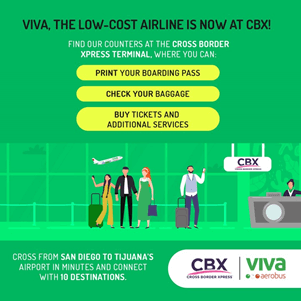 Cross Border Xpress is a direct, secure border crossing between San Diego and the Tijuana International Airport (TIJ) for ticketed airline passengers only, offering airline passengers a convenient alternative to accessing the airport via congested land ports of entry at San Ysidro and Otay Mesa. TIJ offers options for lower fares, flights to more than 30 destinations, and more frequent service to the interior of Mexico than airports in Southern California.

CBX is designed and operated consistent with U.S. and international security standards. U.S. Customs and Border Protection (CBP) operations are located within the CBX facility in the U. S., and Mexican Immigration and Customs are located at TIJ. SENTRI, Global Entry and I-94 services are available for northbound passengers. CBX is a lawful border crossing operated in accordance with federal policies and procedures of the United States and Mexico. The U.S. continues to restrict all non-essential travel across its borders, which directly impacts CBX. Travel restrictions are not limited to U.S. citizens and lawful permanent residents returning to the United States.

Viva Aerobus is Mexico's ultra low-cost airline. It started operations in 2006 and today operates one of the youngest fleets in the world with 39 Airbus 320. With a clear vision of giving everyone the opportunity to fly, Viva Aerobus has democratized the airline industry with the lowest fares in the country and the lowest cost in Latin America, making its flights the best value offer.