Monterrey, Nuevo Leon, May 21, 2019. - Ricardo Dueñas, CEO of Grupo Aeroportuario Centro Norte (OMA for its initials in Spanish); Fernando Hurtado, Senior Director of Global Sales for Las Vegas Convention and Visitors Authority; and Juan Carlos Zuazua, CEO of Viva Aerobus, celebrated the start of the new route Monterrey - Las Vegas, synonym of a boost to connectivity, tourism and economic spillover in both destinations.

Monterrey - Las Vegas begins operation as a regular route on June 2 with two flights per week on Thursday and Sunday. Thus, Viva Aerobus offers over 38 thousand seats annually at prices starting from $76 USD in single flight. Previously, this route was offered only during high seasons. Now, it is integrated to the regular portfolio as a result of the airline's commitment to provide flight options that meet the needs of passengers at affordable prices.

"With this new route, Viva significantly supports the potential and dynamism of Monterrey's passenger traffic, strengthening the Sultana del Norte as a strategic air connectivity spot, specially considering the US: one of the main tourist markets in Mexico and vice versa", noted Ricardo Dueñas, CEO of Grupo Aeroportuario Centro Norte.

According to Las Vegas Convention and Visitors Authority, Monterrey provides the third largest number of direct flights to Las Vegas from Mexico.

Therefore, a new bridge has been created that serves the interests and preferences of Mexican tourists; since Mexico is the second most important source of visitors for Las Vegas. For instance, only in 2017, the country contributed with 1.15 million passengers to this city of Nevada.

“We are excited Viva Aerobus is announcing new direct service from Monterrey, allowing Las Vegas to become even more accessible to visitors from Mexico,” said Fernando Hurtado, Senior Director of Global Sales for the Las Vegas Convention and Visitors Authority. “The addition of these flights reinforces that Las Vegas is a leading travel destination and we anticipate this route will have an annual impact of approximately 27.4 million dollars.”

"Our offer satisfies the demand of passengers with a service distinguished for its customer-focus, the newest planes in Mexico and, above all, low prices" said Juan Carlos Zuazua, CEO of Viva Aerobus. "Therefore, our added value is that with the savings that travelers achieve on their ticket, they have the opportunity to live more experiences and enjoy more their trip. This makes us their best flight option and great allies of tourism". 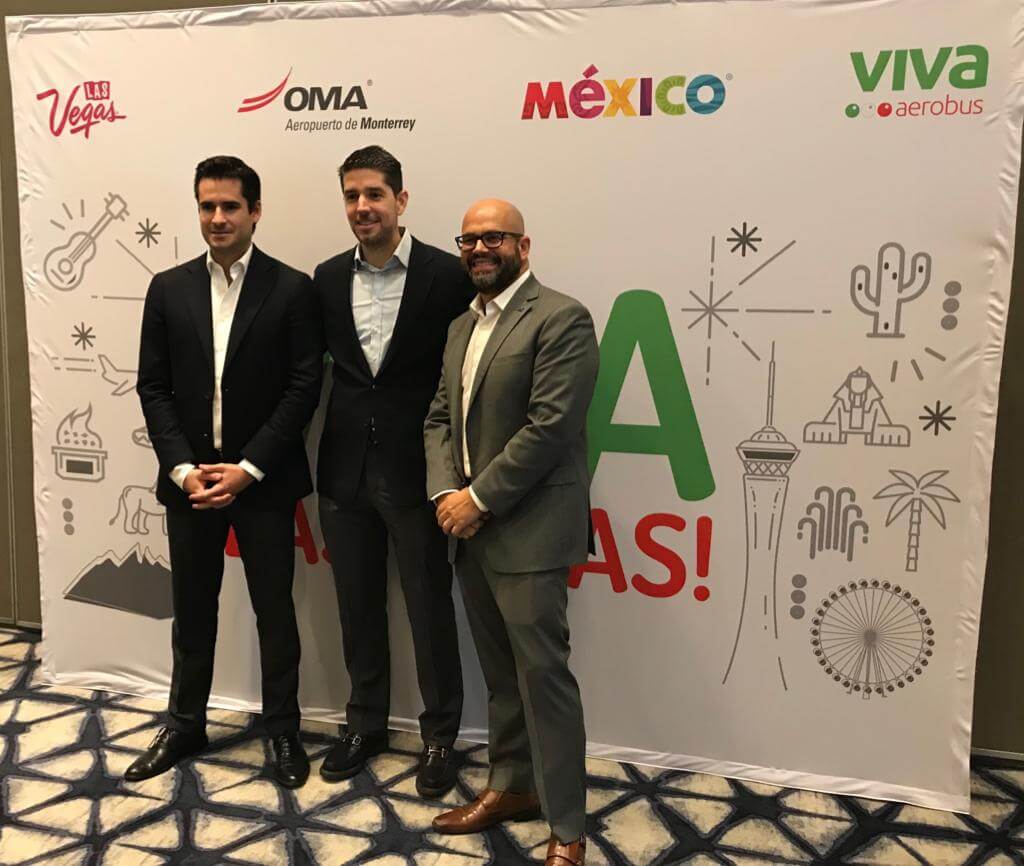 This announcement, once again, confirms Viva Aerobus's commitment to Monterrey. Currently, it is positioned as the airline that offers the largest number of routes from the capital of Nuevo Leon, with a total of 32 direct flights (29 national and three international), being also its most important operational base from where it offers connecting flights.

As a result of this wide offer, the airline operates, on average, 2 thousand flights from / to Monterrey monthly. Besides, 32 of every 100 seats offered to fly in this city belong to Viva Aerobus.

The presence and expansion of Viva in Monterrey, its hometown, is supported by the growing confidence of travelers. The airline achieved a 15% increase in the number of passengers between January - April 2019 compared to the same period of 2018, having transported more than 1.13 million people.

Passengers can purchase their tickets on the official website of Viva Aerobus: https://www.vivaaerobus.com/en, or calling the Call Center +52 81 8215 0150.

Viva Aerobus is Mexico's low-cost airline. It started operations in 2006 and today operates the youngest Latin American fleet with 31 Airbus A320 in 111 non –stop routes to 45 destinations. With a clear vision to give all people the opportunity to fly, Viva Aerobus has democratized the airline industry with the lowest rates in México and the lowest costs in Latin America, making their flights the best offer. For more information please visit: www.vivaaerobus.com/en

As the official destination marketing organization of Las Vegas, the LVCVA promotes tourism, conventions, meetings and special events - as well as ongoing advocacy to extend the city's influence as a leader in tourism and hospitality. To drive the tourism engine that powers the Southern Nevada economy, the LVCVA is charged with and committed to building and protecting the Las Vegas brand among its diverse audiences of current and potential visitors. With nearly 150,000 hotel rooms in Las Vegas alone and more than 11 million square feet of meeting and exhibit space citywide, the LVCVA's mission focuses on attracting ever-increasing numbers of leisure and business visitors to the area..