The inaugural ceremony was attended by Steve Hill, CEO and President for Las Vegas Convention and Visitors Authority (LVCVA) and Juan Carlos Zuazua, CEO of Viva Aerobus, who highlighted the importance of these non-stop flights as strategic allies of tourism and business. 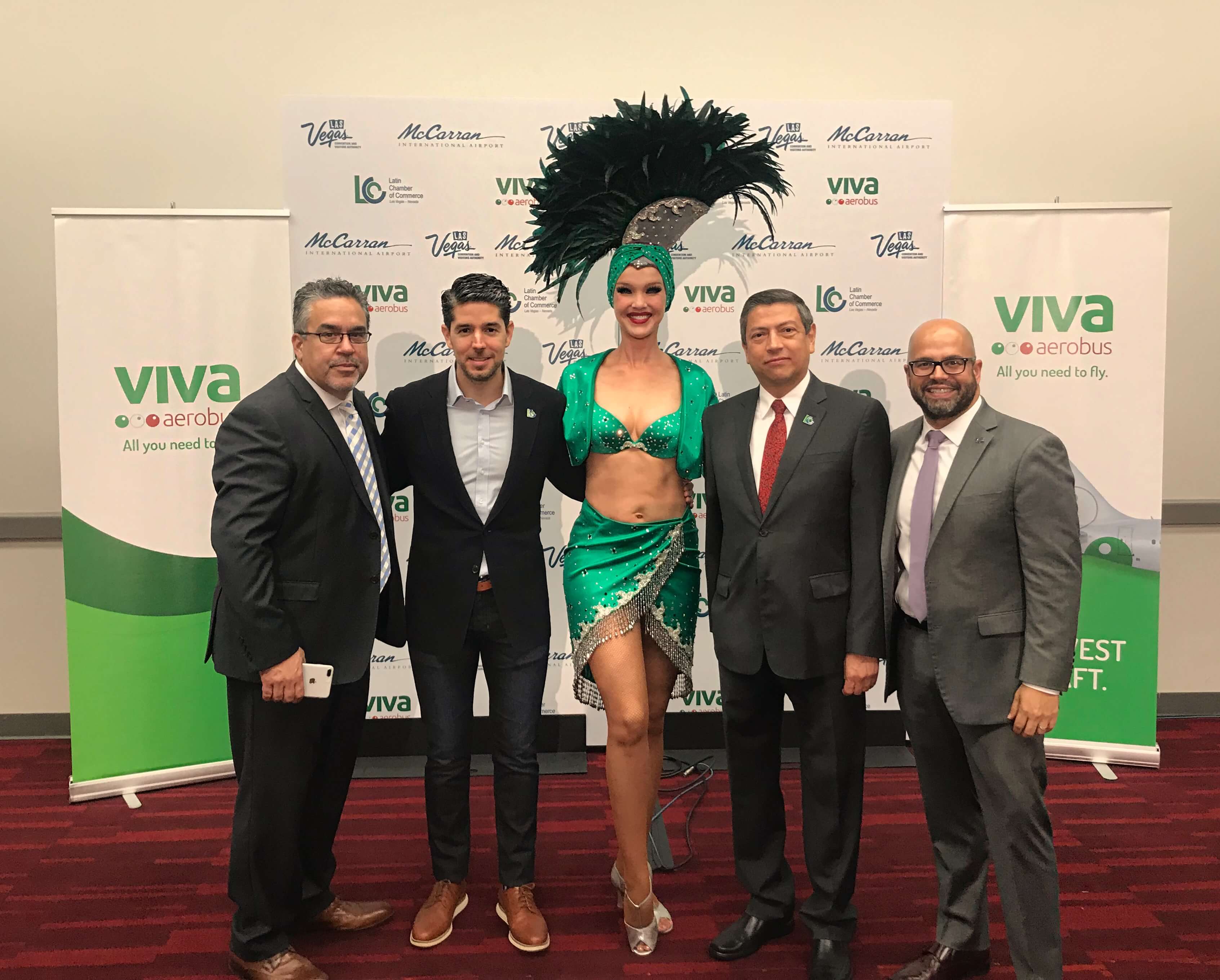 These estimated 180-minute flights will be operated with Airbus A320 aircraft, with capacity for 186 passengers, being the youngest Mexican fleet with an average age of less than 3.8 years; offering the highest standards in safety, efficiency and reliability.

“The launch of direct service from Monterrey provides an exceptional opportunity to position Las Vegas as a world-class destination with the added benefit of convenience and flexibility” said Steve Hill, CEO and President for the Las Vegas Convention and Visitors Authority. “Las Vegas is an exciting global city and the addition of this nonstop flight is an important milestone in expanding our reach into Mexico and growing overall international visitation.”

Moreover, this route gives Americans a very accessible option to discover Monterrey, a city known for business, industry and its economic center as well for its landscape and historical richness.

Previously, these flights were only offered during holidays since 2014. However, backed by Viva Aerobus’ deep knowledge of its customers, this route now offers, continuously, more than 38,000 seats per year serving the bidirectional market demand. According to LVCVA, in 2017 Mexico contributed 1.15 million visitors to Las Vegas and, with this new route, it is anticipated an economic impact of nearly 27.4 million USD in Las Vegas.

Also, the Mexican Secretary of Tourism report of Air Entrances to Mexico by foreigners in 2018, positioned the US as the country which provided more visitors to Nuevo Leon via airplane, totaling more than 200,000.

Viva Aerobus arrives one more time to Las Vegas (already offering Las Vegas-Mexico City) with a win-win formula that has positioned the company as the fastest growing Mexican airline. Viva first arrived at US in 2008 and, now, it already offers 11 non-stop flights from/to US from Cincinnati, Charlotte, Houston, Las Vegas, Los Angeles, New York and Newark.

As a matter of fact, Viva, with more than 12 years of experience, reports one of the highest load factors in the sector, with an average of 90%. Important to highlight, last May, the airline broke its general monthly passenger record with almost a million customers. And, so far this year, Viva achieved a 60% increase in the number of passengers flying from/to USA between January – May 2019 compared to the same period of 2018, having transported more than 171,000 people.

"We are thrilled to launch this new route, which represents a milestone for US and Mexico´s air connectivity. Our low-cost travel option makes the difference as it has added values, flying in the newest Mexican fleet, a customer centric focus and personalized trips as you pay only for what you need”, said Juan Carlos Zuazua from Viva Aerobus. “With us, travelers spend less and enjoy more, that’s why we are the best flight option”, he concluded.

Passengers can purchase their tickets on the official website of Viva Aerobus: https://www.vivaaerobus.com/en, or calling the Call Center +52 81 8215 0150.

Viva Aerobus is Mexico's low-cost airline. It started operations in 2006 and today operates the youngest Latin American fleet with 34 Airbus A320 in 106 non –stop routes to 45 destinations. With a clear vision to give all people the opportunity to fly, Viva Aerobus has democratized the airline industry with the lowest rates in México and the lowest costs in Latin America, making their flights the best value offer. For more information please visit: www.vivaaerobus.com/en

As the official destination marketing organization of Las Vegas, the LVCVA promotes tourism, conventions, meetings and special events - as well as ongoing advocacy to extend the city's influence as a leader in tourism and hospitality. To drive the tourism engine that powers the Southern Nevada economy, the LVCVA is charged with and committed to building and protecting the Las Vegas brand among its diverse audiences of current and potential visitors. With nearly 150,000 hotel rooms in Las Vegas alone and more than 11 million square feet of meeting and exhibit space citywide, the LVCVA's mission focuses on attracting ever-increasing numbers of leisure and business visitors to the area.