VivaAerobus upgauging to a bigger aircraft with an A321Neo order

Mexico City; July 18, 2018.-Viva Aerobus, Mexico´s ultra-low-cost airline, today announced the purchase of 25 new Airbus A321neo aircraft. This order is added to the existing order made in 2013, when the company ordered 52 Airbus A320 aircraft, as well as the purchase of 3 additional aircraft between 2016 and 2017. In addition, Viva Aerobus converted 16 A320neo aircraft, corresponding to the 2013 order, to the A321neo model.

With this historic transaction, with list price of $3.5 billion dollars, Viva Aerobus renews and expands its fleet, endorsing its commitment to continue offering the lowest fares.

"This investment reflects the confidence of our shareholders, employees and passengers in Viva's business model and represents a step forward in the consolidation of Viva Aerobus' firm, continuous and disciplined expansion. The increase of our fleet confirms our commitment to Mexico, to the potential of the market and to the economic development and tourism of the country", said Gian Carlo Nucci, CEO of Grupo Viva Aerobus.

This is the second largest purchase of the company behind its previous order of 52 aircraft in 2013, operation worth over $ 5 billion USD. It is the first time that Viva Aerobus will operate the A321 model, with a capacity up to 240 passengers (54 more seats than the A320); this aircraft offers greater operational efficiency, more comfort for travelers and enriching their flight experience.

"The golden rule of the true ultra-low-cost proposition is to demand the highest operational efficiency. The A321neo, which has the latest advances in aerodynamics, fuel consumption and in cabin innovations, will reduce the total cost per seat by, at least, 15%. This means a direct benefit for passengers, since this advanced technology will allow us to continue offering the lowest fares in the market, strengthening our mission to always be safe, always reliable and always low fares", said Juan Carlos Zuazua, CEO of Viva Aerobus.

Eric Schulz, Airbus Chief Commercial Officer, said: “We are proud of this repeat order by Viva Aerobus, which serves as a testament to the A321 being the aircraft of choice in the mid-market segment. VivaAerobus will benefit from the A321neo’s additional capacity, superior performance, and the very lowest operating cost as they strive to meet the growing demand for cost-efficient air travel in Mexico.”

In this sense, the airline has shown strong results in terms of growth due to travelers’ preference, reporting a 23% increase in the number of passengers during the first half of the year, compared to the same period of 2017. Likewise, on average, Viva Aerobus has a 90% load factor, one of the highest levels in Mexico and the world.

Viva Aerobus is Mexico's low-cost airline. It started operations in 2006 and today operates one of the youngest Latin American fleet with 26 Airbus A320, including four A320neo on 95 routes and 41 different destinations. With a clear vision to give all people the opportunity to fly, Viva Aerobus has democratized the airline industry with the lowest rates in México and the lowest costs in Latin America, making their flights the best value offer.

Airbus is a global leader in aeronautics, space and related services. In 2017 it generated revenues of € 59 billion restated for IFRS 15 and employed a workforce of around 129,000. Airbus offers the most comprehensive range of passenger airliners from 100 to more than 600 seats. Airbus is also a European leader providing tanker, combat, transport and mission aircraft, as well as one of the world’s leading space companies. In helicopters, Airbus provides the most efficient civil and military rotorcraft solutions worldwide. 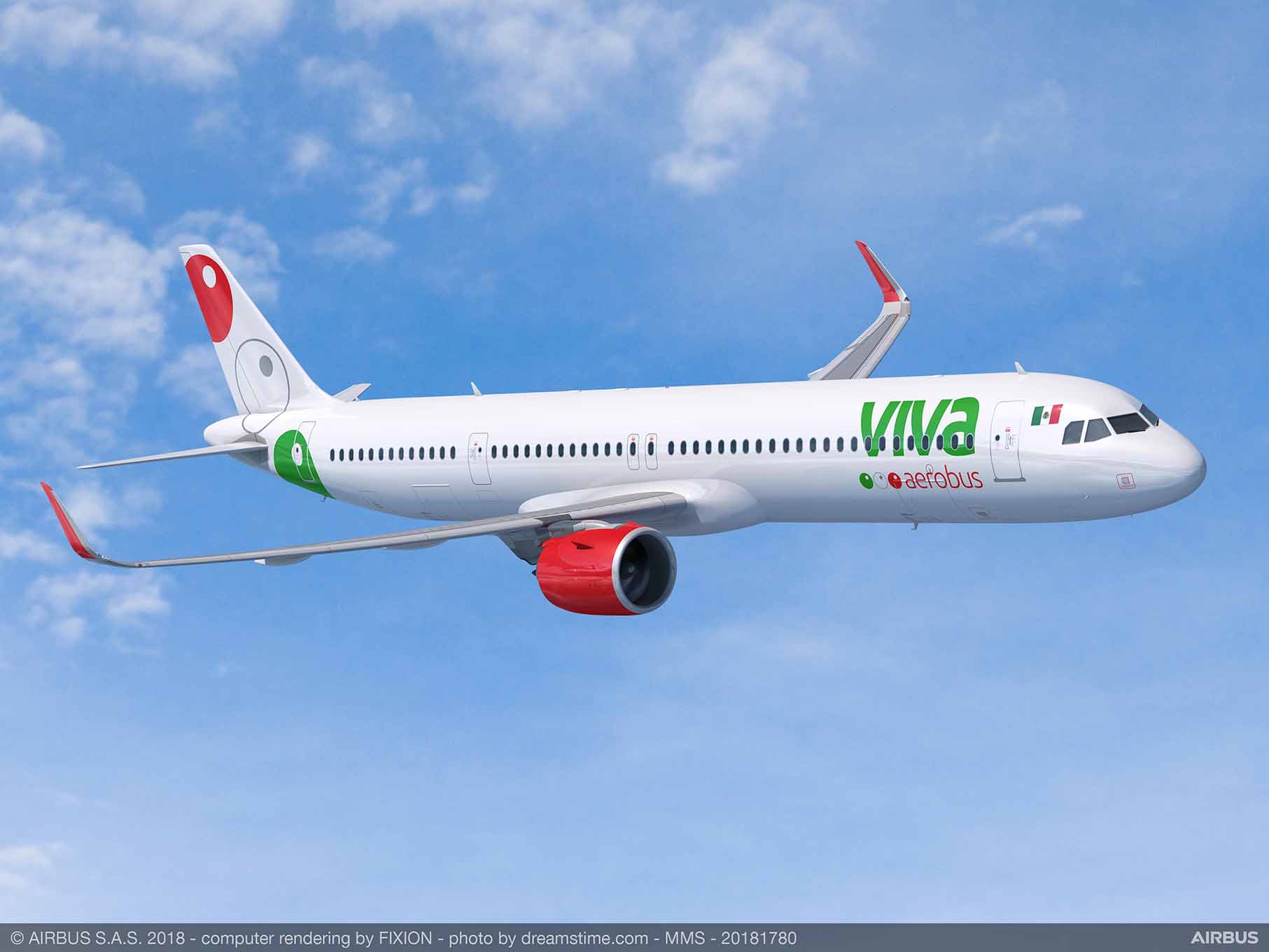